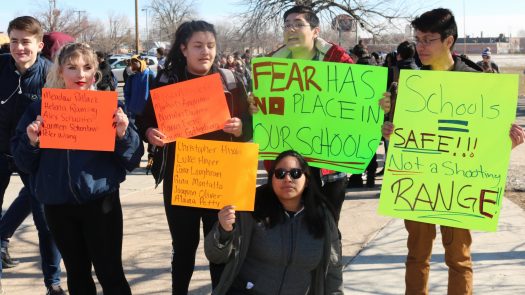 Seventeen dead. Seventeen minutes for the seventeen students and teachers lives lost in Parkland, Florida. Marjory Stoneman Douglas High School students have started the revolution in students standing up for the loss of their friends and mentors. Schools all over the nation have begun to participate in the up roar of taking charge of emotions and recognizing all sorts of loss in our schools.

In the span of three years, Curie has lost seven current and former students and a faculty member. Out of those deaths, four were caused by gun violence in the city of Chicago. It feels like violence and gun deaths are completely normalized, especially for those of us in urban areas like Chicago.

Raquel Milliner-Reynard, a school-based clinician who works at Curie High school said that student death and death in general is almost a normality. Gun violence is the number one cause of death in Chicago. The south and west side are considered to be predatory because of the constant almost regular violent occurrences.

“It’s a very real possibility that all of you kids just won’t come back when we come back from breaks. It’s scary you guys are our babies,” said Raquel Martinez who works in the Program Office.

Chicago, like New York or any other city, never sleeps. It’s often said that the nights when you don’t hear gunshots or violent yelling are the strange ones.

Curie students have had to grieve for those we have lost too many times.

“It was really hard to believe. All I could do was cry,” said Esperanza Rios, a close friend of two of the deceased students.

Rios expressed how her first reaction was denial, above everything else. “It was my best friend’s birthday, and I just couldn’t believe it because he was on Facebook just a few hours before,” she said.

A life can be taken in a blink of an eye as it was for every student and faculty member at Curie. Death comes in many shapes and sizes.

Expected death is defined as a death that is anticipated, something like an illness. Some argue that in Chicago especially, someone in a gang or someone shooting up every day could also be defined as something to anticipate.

Freddie Sorrells (DIV 031) spoke at the Walkout for our Lives on March 14. Sorrells said the violence we see is often related to a culture that normalizes gangs.

“I spoke at the walkout because I want little boys to know being in a gang isn’t cool,” he said. “I’ve been approached with people who want me to be a part of that, but I have goals. I don’t want to die before I turn 20.”

Sorrells is 15. His entire life he has been approached about joining gangs and turning guns into a major part of his life. He comes from Englewood, a neighborhood which is sometimes called Chicago’s murder capital.

“My boy got shot down on 76th street, and all I could do was cry. I only stopped crying when it started to hurt. I wasn’t expecting it at all,” Sorrells said.

Sorrells also faced unexpected death when he lost his grandmother. “She held our family together,” he said.

Each time he faced the death of a loved one, Sorrells said, he couldn’t stop crying until it started to hurt.

When someone dies, it’s always going to be a shock, but dealing with suicide is different. In cases of suicide, most people find themselves overwhelmed with guilt even if they didn’t know the individual because they feel it could have been prevented.

Leslie (not her real name) is a current senior who lost a good friend to suicide.

“It was crazy to think about the fact that he actually did it, we used to joke but I never thought it would actually happen,” Leslie said.

“I cried, I cried so much. He was my best friend, and I miss him so much,” Leslie said.

Suicide leaves the loved ones of the deceased with unresolved or unfinished emotions.

There’s always that one thing that you could have said, should’ve said, never got to say or said to often. Was it my fault? Is there something I could have done?

The internet has brought us to a place where we joke about death and suicide. People throw around terms like KYS (kill yourself) or KMS (kill myself). When news hits that such thing actually happened, most people’s first reaction is, “Are you joking?”

Victims of suicide are often looking for someone to notice their cry for help. Is KMS a cry for help, then? Is the ability for people to put “I’m going to KMS” online a legitimate cry for help, or is it just overlooked because it’s a joke? It’s generally taken as a joke. Would it be wrong to assume that suicide could be anticipated, or even expected if in today’s day and age it wasn’t such a joke?

“He always used to say that he would kill himself, but he would always brush it off right after. You know, it was a joke. But since then, I have stopped using those words. I can never joke about that again,” Leslie said.

Sara (not her real name) is a Curie student who has lived through this experience. “I’ve struggled with depression and I have attempted suicide, but I’m still here and I’m glad I am.”

As a survivor, Sara feels deeply affected by the loss of life at Curie and across the country. She participated in Curie’s walkout.

“I wanted to be part of the walkout for a few reasons” Sara said. “People are dying, kids are dying, way to often and its needs to be talked about, and mental illness being overlooked by our superiors, mental illness is what causes these events and it needs to stop.”

Just as we have turned death into a joke, mental illness is also made light of. Having OCD or anxiety is a cute excuse. Calling someone bipolar is just a way of joking around about people being emotional. When someone actually has a condition of mental illness, though, we try to avoid talking about the issue.

Karen (not her real name) is another student who has coped with mental illness and attempted suicide. Karen said that when she tests the waters by lightly saying how depressed she is to teachers, they tell her, “Oh, you don’t look depressed. You don’t look crazy.” But what does crazy look like? Not every ill person is shaking in a corner talking to imaginary friends and ripping their hair out. Mental illnesses are often not visible to an observer.

“Anyone can be severely mentally ill and look just like you and me,” Sara said.
Death is natural and everyone dies, but we need to be safe and aware of our surroundings to avoid premature deaths through violence or suicide.

“Suicide is a thing. We should talk about it in a real way,” Karen said. “We need to have a naked conversation instead of dancing politely around the subject.”

Both gun violence and mental health are problems that need to be discussed and addressed in our school and in our nation. For now, all survivors can do is be true to their emotions and grieve those who have been lost.

In the weeks since this story was first written, another shooting has happened. Another school, this time in Sante Fe, grieves the sudden loss of

“I cried until it hurt,” Sorrels said.

“When I found out, I just cried,” Leslie said.

“I grieve for my best friend. I love him and I miss him,” Leslie said.

“I grieve for my boy. I miss him,” Sorrels said.

“I grieve for the life that I used to live, one where I was happy and just really good,” Sara said.
_____
If your ever going through a rough patch or need help with dealing with a death, please reach out for help. Reach out to your teachers, counselors, support staff members or other trusted individuals.

The hotline below is a phone resource to help individuals in crisis who have no one else to talk to in the moment. It is 24 hour.
National Suicide Prevention Lifeline
1-800-273-8255
Online Chat Lifeline
https://suicidepreventionlifeline.org/chat/