Limitless, the group that is bringing hope to young music engineers 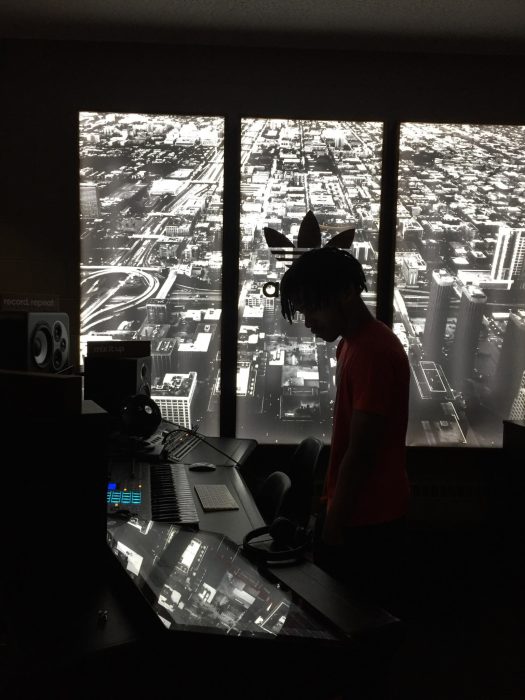 He’s known around Curie as The Bopking, The Dancer or Jay Savage. He’s been dancing since he was three years old and rapping since the end of his sophomore year. Music plays a huge role in his life as well as many others. That’s why he’s making the most out of Curie’s music studio which was sponsored by Adidas. He’s not alone though; he has brought many other students together to collaborate and make great music hoping to cause a positive influence and encourage young people who are producing their very own music.

Jamal Poindexter (Div. 808), is the junior who brought it all together. He started Limitless, a group of Curie’s students who produce music due to their passion for it. Although the odds may be against them, this group is striving with their ambitions to successfully fulfill their goals through music.

“Since I dance, drum…do all of that, I have a drive. My drive is much harder than certain people you meet. I want to be better than anybody. That’s my mindset. I have an optimistic mind. I’m going to keep pushing forward, and I’ll forever be in the studio if I had the chance to,” Poindexter claims.

Creating music takes time and dedication. Therefore, Poindexter seeked to find people with the same mindset like Alberto Lopez (Div. 031), who  believes that improving yourself and being the best you can possibly be, is a must when it comes to making music.

“It just takes time and work. If you don’t try your best, what the point? You need to keep working and working until you get better,” Lopez said.

While Poindexter may be three years ahead in high school compared to Lopez, age isn’t what matters in this case. Music ties all people together. They agree that only a positive environment is what unites them to work consistently.

“You have to have a positive environment. You can’t be around negative people. You need people that want to be at the top with you,” Lopez said.

They expanded their 2-partner duo to a larger group and met students that had the positive energy that was needed to create the environment they need to grow and flourish.

Charles Erving (Div. 028),  the male lead singer, has been singing since he was 7 years old at his church. He brought his talent with him into the group.

“I had to realize it’s not about what other people like; it’s about what makes me happy and what’s satisfying to me. I had to practice everyday and grow confidence,” Erving stated.

Akenya Williams (Div. 913), the female singer brought in the same talent to Limitless. She’s not only involved in singing at church and school but also dances professionally and does a lot of traveling on the road.

Williams had the opportunity to perform for the famous talk show host and rising pop star, Demi Lobo, at her concert back in 2014. The factors that come along with fame such as money and power can become a destruction in a music career.

“Singing can actually take me far. Most artists get themselves into a lot of drama because money can take over you and the fame. I don’t want that to get in my head,” Williams claims.

She’s not the only one out of the four that has had the opportunity to meet different artists. Poindexter has also had numerous opportunities to meet and receive music critique from famous artists such as Chance The Rapper, Snoop Dog, Pusha T, R. Kelly and DLow.

“I can be up there with them, but I want to work for it. I want to strive for it myself. I don’t want to take the easy way out. I want to go through obstacles to see for myself,” Poindexter states.

Although music may run in their families, when asked about support, some of their answers were quite surprising.

“My dad just thinks it’s a phase I’m going through, but my brother sees it as, ‘I can go places’. He’s been my inspiration since I was a little kid. He’s always giving me advice, especially about music. I ask him a lot [about beats]. He’s helped me a lot,” Lopez said.

Poindexter can relate as he has some support from his family but not 100% support.

“They support partial of what I do. They don’t support everything. My ideas are my ideas. It’s not like ‘you should do this or you should change that,” Poindexter said.

Limitless has made it clear that students must be willing to seek the help themselves whether they have the support at home or not if they really want to succeed. Support will always be given out at Curie from students who help bring out each other’s strengths to teachers like Mr. Jukube Felton who has been a great influence and helped them become who they are today.

“Here’s what I do…I create musicians. I can take a person who has a little passion and talent, and I can grow them like a flower. I have students on the road, students who receive Grammy’s, students in movies, and some people just want to play for themselves. We do all of that. That’s my gift, teaching.”