Diontae Norwood opens up about violence in his past 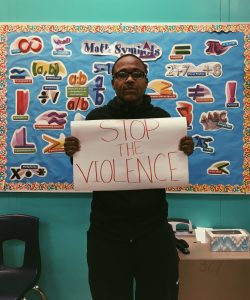 “I refuse to give up on my city. We will get better, and it will stop.” These might be questionable words to some considering that many people think of Chicago as the murder capital of the world, but that’s exactly the mindset of Diontae Norwood (Div. 721), a student athlete at Curie High School.

Norwood has lived in Chicago his whole life, witnessing and experiencing many deaths in addition to life-flashing moments. At many points in his life, he feared that he wouldn’t make it to a certain age, but he continues to have a positive mind and tries to escape the death-defying streets of Chicago the right way with school.

“The moment we feed into the idea gun violence is never going to change, is the moment we lose the war against it,” Norwood said.

Gun and crime violence are depleting the city of Chicago at unbelievable rates, taking lives and leading to incarcerations. It can feel rare to find young men like Diontae who stay out the way of this lifestyle and try to do things the right way in Chicago.

According to Norwood, this lifestyle sucks in a lot of young men, leaving them with only two roads: “dead or in jail.”

“I think education is key. When discussing the guns, many young men use them, but don’t know what they are getting themselves into. If we educate them, then they will learn and know,” he said.

“It’s up to them, they have to want it. You can give them the food, but it’s up to them to eat or not,” Norwood said. “The guys in the streets have no hope. That’s why they go to the streets they see a opportunity to get money fast and live an exciting lifestyle, not thinking about consequences.”

Norwood was once at a point in life where he would be one of these guys out there living that lifestyle.

“The drugs go hand and hand with this because how do you think they get the money to get the guns from corrupt dealers,” he said.

“The police fear for their life, and they think their help is pointless. They can’t stop each time they try in reality it’s just risking they life.”

Norwood once watched a shoot-out take place in his neighborhood, and the police were in the area, but didn’t come to the scene.

“The parents at home don’t teach their kids to be anything, either. I’m blessed I had the parent I did because my mom always had a plan for me to be successful. It took me time to see it, but I did, and now look at me.”

Norwood grew up with a single mom and brothers. He took on the father role for his little brothers. At a point in his life, he felt as if being in the streets was the only way he could provide quickly for his family.

“I was once out doing something I was not suppose to be doing and was skinned by a bullet in my right leg,” Norwood said with obvious regret and sadness.

Norwood has been victim to gun violence and also has loved ones who lost their lives to this gun violence, so he’s no stranger to the toll it takes on a human being.

“I have lost many to these streets and gun violence. I know the pain others throughout the city feel when they are affected, and it hurts deeply. That’s why it has to stop.”

Norwood believes he setting an example for the future with the lifestyle he’s now living. Once he becomes successful, he plans on giving back and helping some of the young men who are part of this gun violence get their lives together and become successful.

“Everyone needs to do everything they can to better the city.”