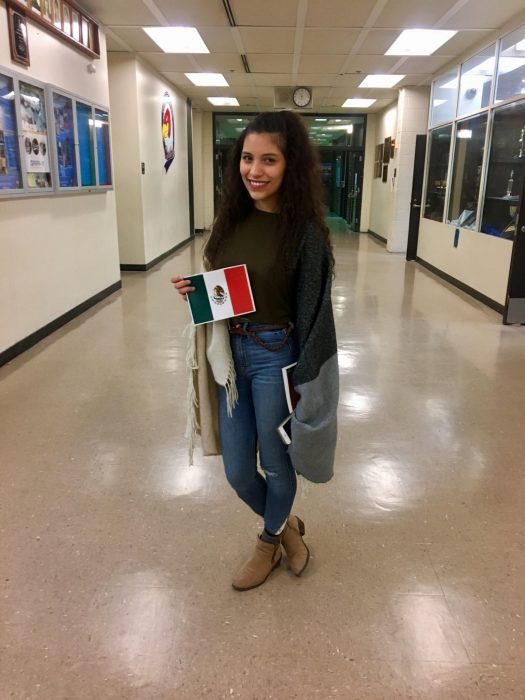 ▲
America holds a flag to show her heritage.
Yuleni Pulido

▲
America holds a flag to show her heritage.
Yuleni Pulido

She is a 16-year-old, undocumented immigrant who attends Curie High School. She worries that every day will be her last in the United States. She believes the title “undocumented immigrant” doesn’t make her any less of a human. She struggles due to where she comes from, but she keeps herself going. Even though America* is afraid of what might happen in the future, she’s proud of how far she’s come.

“I was in first grade when I got here, and it was really difficult for me to get used to things especially adapting to a language I didn’t speak,” America said.

America migrated to the United States from Mexico, and she was willing to go through any challenges for a better life.

“Due to our 2017 president, I’m afraid of what might happen to me and my family later on. I fear that one day police might come to our door and say, ‘You got to go’.”

America and her family, who are all undocumented immigrants, fear that they will all be deported. She fears the effect it will make on her education.

“I was offered this program called DACA. This program helps illegal students have the same rights as citizens. Right now, this is what’s keeping me going,” America said.

DACA, President Obama’s program for Consideration of Deferred Action for Childhood Arrivals, is America’s motivation. It reminds her that she is not the only person who’s struggling through situations like this one.

Despite the current climate around immigration, President Trump has repeatedly stated that DACA will not be changed or removed.

“I can’t stay down because of what the media says; I’ll only bring myself down, and it might affect a lot of things like my education and family,” she said.

America considers her education very important and wants to take advantage of the fact that her parents brought her and her siblings here to the United States to have a different life than the one they had. Focusing on what the media says will only affect her personal life.

“I want to stay positive for the best of me and my family because when I stay positive, I’m able to focus on the tasks I do and get things done.”

America believes that there will always be negative comments and pessimistic people who will doubt her success, but as long as her family and herself are motivated, she will continue to work hard.

“It wouldn’t be fair if I do get sent back because it would be like starting all over again.”

* Editors’ Note: We removed last names from this profile to protect the student’s public identity and family due to the imminent threat of deportations.